Chargeback is a process by which an issuing bank debits the merchant’s account to return it to the cardholder. All schemes have their own specific rules.

It should be noted that chargebacks are dangerous because their acceptable monthly number can be limited, and exceeding the established norm will lead to the cancellation of your trading account.

Every credit/debit card provider, whether it’s Visa, Masterсard, American Express Company (Amex), or any other, has certain chargeback thresholds, and exceeding this threshold has several consequences:

A chargeback occurs when the issuing bank cancels a card transaction because of:

This includes transactions where an available EMV chip was not used for authorization, where stolen payment card data was used in a card-present or card-less environment, and transactions reported by the Visa Fraud Monitoring Program.
Processing error disputes can include late presentments; incorrect transaction codes, currencies, account numbers, or accounts; duplicate processing, duplicate payments involving payment by other means; and transactions containing invalid data.
This category tends to deal with issues that can crop up between the customer and the merchant, such as merchandise or services not received, recurring transactions that the cardholder attempted to cancel, merchandise that is counterfeit or defective, merchandise that does not match the product description, failure to process a refund credit, and other merchant misrepresentations.
Disputes in this category include transactions processed without authorization or with a declined authorization.

Chargebacks are described by types:

By default, merchants are liable for chargebacks. This means that when a chargeback occurs, the funds are withdrawn from the merchant’s account and returned to the cardholder. Although both the merchant and the cardholder may be victims of fraud, the merchant pays for it.
With each chargeback, the merchant loses the transaction amount, as well as all goods and services that have already been provided. In addition, merchants face chargeback fees from their acquirers and processors. The chargeback rate is tracked by the acquirer, and merchants that exceed the allowable threshold may be subject to severe penalties.

If the chargeback rate exceeds certain thresholds set by card networks and other financial institutions they do business with, they may face fines, additional chargeback fees, and even termination of their trading account.

Card schemes (such as Visa and Mastercard) monitor your disputes monthly and compare them to your sales. If the number of disputes (also known as chargebacks) you receive exceeds what the card scheme deem acceptable, you may be placed into their monitoring program.

Once you join a program, the system may charge you monthly fines and additional fees until you decrease the number of disputes to acceptable levels.

Visa has established two monitoring programs to identify merchants with excessive disputes and/or fraud to promote the use of fraud controls and fair business practices.
Both the Visa Dispute Monitoring Program (VDMP) and the Visa Fraud Monitoring Program (VFMP) run on a monthly cycle within a 12-month timeframe. At the beginning of each month, Visa reviews the previous month’s processing activity and identifies merchants that exceed the program thresholds. Your company must exceed both thresholds to be included in a program.

Visa calculates the ratio of disputes to sales as follows: the number of disputes you received during the month divided by the number of sales you processed during the same month multiplied by one hundred.
For example, if you had 175 disputes in January and made 5,500 sales in January, your dispute-to-sales ratio would be 3.18% (175 / 5500 x 100).
This would place you in the standard level of the VDMP (if you are in a non-high-risk merchant category).
Visa will remove you from the program if your dispute activity falls below the Standard thresholds for three consecutive months.

If your company is accepted into a program, you will be required to submit a recovery plan on a monthly basis starting from the second month. This plan will identify the root cause and describe actions to restore compliance. The plan should include milestones and dates for all remediation actions. Non-compliance fines will be calculated monthly based on the schedule and the month of program participation. To opt out of the program, your company must remain below the standard thresholds for three consecutive months. If your company remains in the program for more than 12 months, you may be disqualified from accepting Visa payments.

Mastercard measures your chargeback rate in “basis points” and uses the number to determine which tier of the program you fall into.
These basis points are calculated as follows: the number of chargebacks in that month is divided by the number of Mastercard transactions you processed in the previous month and multiplied by 10,000.
For example, if you had 185 chargebacks in February and processed 7,500 payments in January, you would have a chargeback rate of 247 basis points (185 / 7500 x 10,000 = 246.66, rounded up to 247). This would place you in the Excessive Chargeback Merchant (ECM) tier of the program.
Mastercard will remove you from the program if your dispute activity falls below the ECM thresholds for three consecutive months. 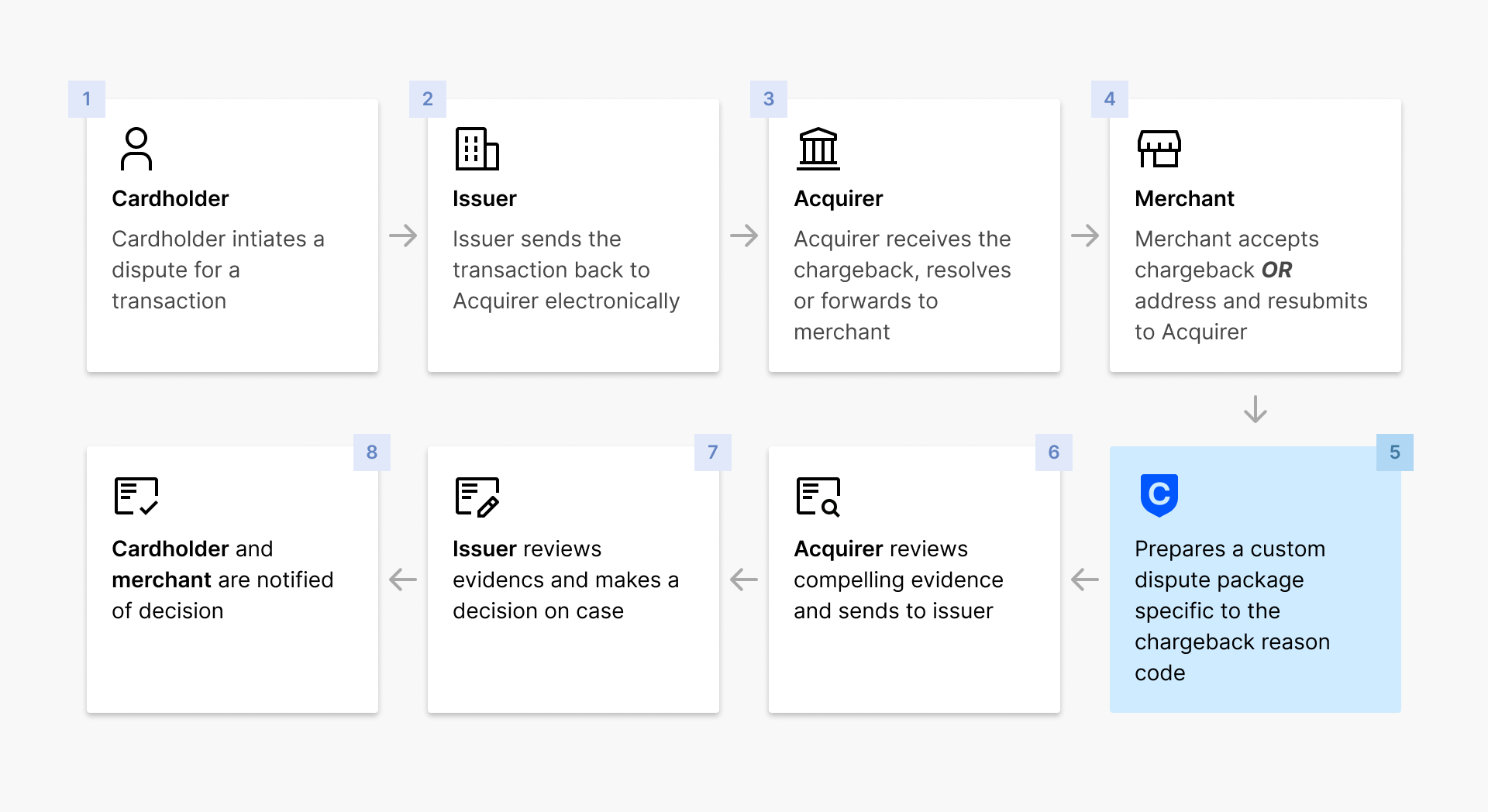 If you need to prevent a chargeback, follow these rules:

You have a timeframe to respond to a chargeback before it is accepted by default, typically 7-30 days.
This is a short (one-page) letter outlining your counterarguments to the cardholder’s claims.
You must have documents that relate to the claim and prove that you are right. Each chargeback reason code has certain standards as to what evidence can be used against it, so always look at the reason code to determine what you need.
Chargeback alerts
Details of general explanation, type and principles.
Matching alerts
Matching algorithm, logic approaches and response time.
Integrate
General steps for integration and definition about linking data.
Get started–>